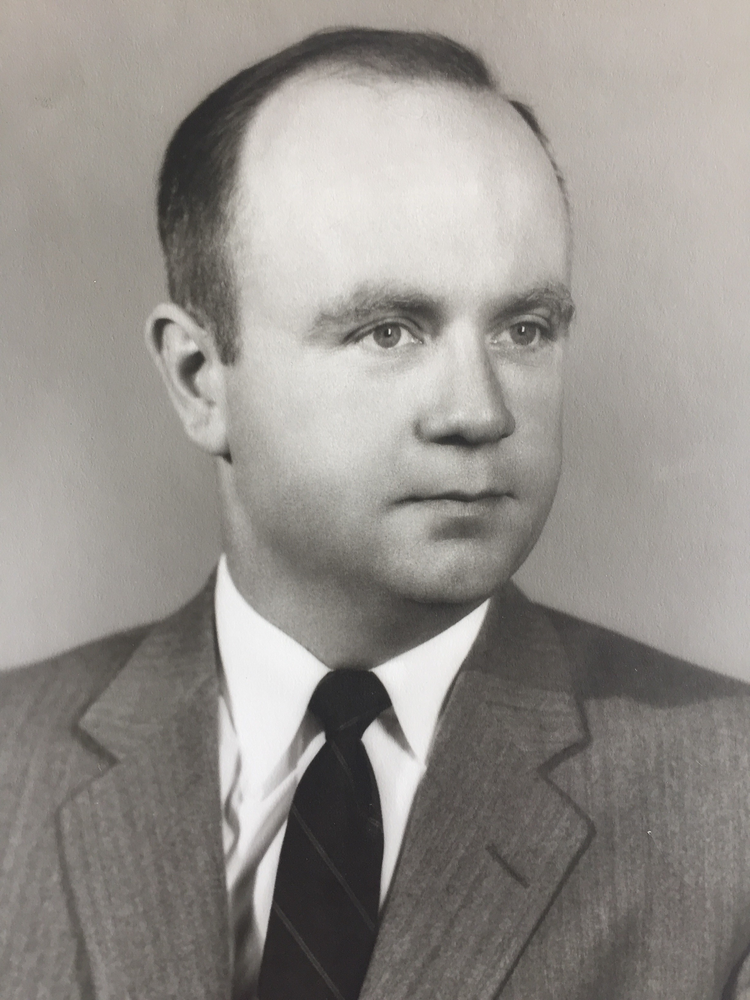 "Let me tell you an interesting fact," Lowell Vineyard might say when discussing Penn State, the University of Illinois, Boy Scout pup tents, corn chips, the U.S Navy in the South Pacific, Mark Twain, George Gershwin, Paul Whiteman, Big Bands in general, the musical, "Show Boat," and he was just getting started. "Let us depart in peace" was the Scriptural conclusion to your enlightenment, with his blue eyes twinkling like Santa Claus. This most gentle of men passed away early May 11, 2020 in his 99th year at his residence in Juniper Village in State College, PA. Since his wife Gretchen died in 2015, Lowell called living there "flying solo" though he was surrounded by the staff's love and care. His last days there were also accompanied by his only daughter, Julie Gittings who survives with her husband, Gary. A. (Arthur) Lowell was born in Winchester, Illinois in 1921, the first of four sons to Orpah Knapp Vineyard and Arthur A. Vineyard. Though losing their own father early, the four boys and their mother were a close and happy household with Lowell ably filling the big brother and homework helper role. Mrs. Vineyard taught in the one room schoolhouse down the dirt lane. The story goes that Lowell weekly carried home 4 dozen eggs from the chicken farmer nearby. A Great Depression would forge strength and a lifetime of preference for buckwheat pancakes with Karo syrup instead of eggs. All four young men would eventually serve honorably in the US military forces. Lowell kept each piece of his U.S. Navy correspondence, assignment, flight record, fitness exam and ribbon commendation beginning with his enlistment as an ensign 2 months after Pearl Harbor, February, 1942. He stayed on both active and inactive reserve until a last honorable discharge in 1957 as a Lieutenant Senior Grade. His primary stations in wartime included Corpus Christi TX and Pensacola FL for his flight training and assignments as Naval Aviator and Flight Instructor. In 1946 he posted to Honolulu and Okinawa to join the United States Pacific Fleet and the air force Patrol Bombing Squad 128. Kernels of wisdom from a lifetime of his well-honed "Free Lectures" date from his instrument training, flight instruction or the popular music. "Maintain air speed." "Stay with the program." "Straighten up and fly right!" Lowell had lost at least one war time comrade to a cruel beheading in a prison camp, but he would not discuss this nor did he ever see any humor in the TV comedy of "Hogan's Heroes" or need to purchase an automobile not manufactured in the USA. Lowell Vineyard stayed loyal to the University of Illinois football and marching band from the time he re-enrolled with GI bill assistance, was graduated with a B.S in Engineering, and started office careers at ALCOA and the Dravo corporation in Pittsburgh. By now he had courted and married Gretchen and become a doting if overprotective father to Julie Anne. Their surburban brick house with turquoise interior, fireplace, cozy rooms and nestled nests in rosebushes was the Blue Heaven center of his world along with the raspberry patch in the tiny "North Forty". Lowell made and flew kites and helped most of the neighbor kids learn to ride their two-wheelers. The family splurged for Pitt season tickets during the Michelosen years, including a poignant loss in 1963 to Roger Staubach's Navy squad. When Julie enrolled at Penn State in 1971, Daddy bought two season seats in Beaver Stadium which he kept until he and Gretchen both qualified for the handicapped elevator. The last trip he made to his beloved Memorial Stadium came in 1994 - Collins, Ki-Jana, Milne, Brady, Engram, and 96 yards later, Lowell Vineyard was the happiest fan in Champaign, 35-31 Lions over Illini. During his Pittsburgh years, Lowell sang in the Baldwin Community United Methodist Church Choir, attended a Men's Weekly Breakfast Worship and frequented Isaly's Dairy Store as an early Klondikes trendsetter. He read American novels, preferring Thomas Wolfe and Hemingway, and played the piano for relaxation, working years to conquer a tricky arrangement of "Rhapsody in Blue". Lowell and Gretchen regularly attended the Christian Science church when in State College, while the talented social directors of the Oaks in Pleasant Gap kept him singing even as he declined mentally. The talent show audience sniffled into hankies both during his "My Blue Heaven" and his slow, patriotic solo verse. O beautiful for heroes proved, in liberating strife Who more than self their country loved, and mercy more than life America, America, May God they gold refine Till all success be nobleness, and every gain divine Lowell's family is deeply grateful both to the Oaks and Juniper Village Skilled Nursing. (Brookline) Your medical skills and untiring cheerfulness kept him happy and contented and your strength and deep compassion sustained his family. Thank you. As a memorial, please consider making a donation to your own local Food Bank or the S. Atherton State College Food Bank network, scfoodbank.org, in lieu of flowers. The family will drive his ashes to Springfield, Illinois to be interred with those of an infant son, Gretchen and her parents. Three sisters in law, one surviving nephew and 6 nieces with their own children and grandchildren hope to join Julie, Gary, their two daughters, Hilary and Leslie, their spouses, Jeremy and Erica for a graveside ceremony at the Oak Ridge Cemetery, not far from Abraham Lincoln's tomb. Three much loved great grandchildren, Lyra Trethewey age 5, Grayson age 5 and Savi Gittings age 2, will try to stand at attention while the trumpet leads in "Eternal Father Strong to Save- the Navy Hymn," and a final Taps. Arrangements are under the care of Koch Funeral Home, State College. Online condolences and signing of the guest book may be entered at www.kochfuneralhome.com.
To send flowers to the family or plant a tree in memory of Lowell Vineyard, please visit Tribute Store

Share Your Memory of
Lowell
Upload Your Memory View All Memories
Be the first to upload a memory!
Share A Memory
Send Flowers