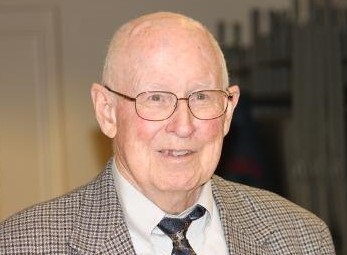 Get Directions
Friday
14
May

Frank Gahring Bamer Jr., loving husband, father, grandfather, uncle, and friend, passed away Tuesday, April 20, 2021 at Centre Care in Bellefonte, PA. He was 89 years old. Born July 8, 1931 in York, PA and raised in State College, Frank was the son of the late Frank G. and Ethel W. Bamer. 64 years ago, on April 17, 1957, he married Connie (Wallace) Bamer, who survives at home. He was the devoted father of four daughters: Chris Igo (Bob) of State College; Judy Ploetz of Garden Valley, CA; Sharyn Granlund (Carl) of Stewartstown, PA; and Jenni Bamer of State College. He was also known as Poppy to his grandchildren: Andrew, Casey, Madalyn (Josh), Chelsea (Dylan), Ashley (Nick), Emma, Noah; and great-grandchildren Lilly and Jack. He loved his many nieces and nephews who will also greatly miss him. He is survived by his sister-in-law, Nancy Wallace who resides in Burke, VA. In addition to his parents, he was preceded in death by his sister, Ruth Bamer Gary (Bud) and son-in-law, Tom Ploetz. Frank was a 1950 graduate of State College High School and attended Penn State University. He was drafted to the United States Army during the Korean Conflict and was honorably discharged in September 1954. Frank had a diverse career centered on electronics which led him to many interesting and fulfilling jobs over his lifetime. He eventually retired from Penn State's Applied Research Laboratory in 1996. Throughout his life, he enjoyed wood working, metal detecting, tinkering in his garage, as well as morning coffee with his retired friends at McDonalds and Burger King. Frank's love of aviation led him to be a member of the Experimental Aircraft Association (EAA) and earned his pilot's license in 1991. He enjoyed watching and following all sports, but especially enjoyed State High football and Penn State wrestling, as well as attending softball games held at Hess Ball Field. Visitation with family will be held Friday, May 14th 1- 3 pm and 4-6 pm at Koch Funeral Home, 2401 South Atherton Street, State College, PA. A celebration of life service will be held at the convenience of the family. In lieu of flowers, the family requests that memorial gifts be made in Frank's name to the John Hess Softball Complex and can be mailed to CRPR (Centre Region Parks and Rec), 2040 Sandy Drive, Suite A, State College PA 16803 or the donor's favorite charity. Arrangements are under the care of Koch Funeral Home, State College. Online condolences and signing of the guest book may be entered at www.kochfuneralhome.com.

Share Your Memory of
Frank
Upload Your Memory View All Memories
Be the first to upload a memory!